Spend the week with the family, on board a luxurious motoryacht, cruising back through time to the most historic locations in the Saronic and the southwestern Peloponnese! Your introduction to Greece’s culture and history takes you elegant Hydra and Spetses, medieval Monemvasia, the world renowned beaches of Elafonisos and to rustic Kythira. This laid-back tour will inspire families and friends looking for an alternative and cosmopolitan holiday near Athens, that also adds a historic twist.

What you need to know

Your family only needs 7 days to explore thousands of years of Greek history and culture. This tour is designed to give travellers an in-depth understanding of the civilizations that left their mark in the islands and mainland south of the Greek capital Athens.

Setting off from Southern Athens at 5:00p.m., your first destination is the island of Hydra. Inhabited since the Neolithic times, the island became an important 18th century maritime center. The 30’s found Hydra attracting artists and authors from Greece and around the world who established its modern day character as an island of the Arts. The island’s beautiful, car-free port is its main community, and the home of the National Historical Museum and the Archives Museum. A number of art and culture festivals take place there each summer, and we’ll inform you about which ones you’ll want to visit with the kids! Dining and entertainment options mirror the island’s character – you can have your pick, from unembellished Greek taverns to elegant restaurants. Don’t worry about having enough time to explore Hydra, you’ll also have the whole of next day to visit every sight and beach worth visiting. Spend the first two nights in Hydra.

On the third day you will head for Spetses – mirroring Hydra’s 18th century shipping and trade history, the island has turned into a favorite destination for the yachting jet set. With private automobiles prohibited, the long and quiet promenade along the port is used mostly by pedestrians and horse-drawn carriages. Swim in the beaches along the promenade and after sunset, go for a movie with the kids at the two summer cinemas on the island (movies are never dubbed). Visible along the promenade but mostly tucked into the maze of streets are Spetses’ restored merchant villas – to take a look inside, visit the Museum of Spetses – housed in a wealthy shipowner’s mansion built in the late 1700s. Spetses’ Bouboulina Museum is dedicated to Greece’s female admiral Laskarina Bouboulina who played an important role in Greek independence. Overnight in Spetses.

Further south, your captain will take the family to Monemvasia, the town-fortress hidden away on an island off the Peloponnese coast. Crossing through the entrance of the city’s stone wall, you might as well be back in 583 A.D. the time of the town’s first tumultuous steps through history, as an important trade and maritime center, pirate lair, and valuable prize for the Venetians, Byzantines and Turks. Monemvasia is as accessible yet far away from modern civilization as a European city can get! Overnight in Monemvasia.

You’ll be swimming in a number of family-friendly beaches on the first leg of your tour, but your next waypoint of Elafonisos is truly special. The double beach of Simos and nearby Sarakiniko are famous the world over, featuring golden sands and dunes up to 10 meters high. Panagias Nissia is also very popular, with indigenous juniper trees lining this large and Caribbeanesque beach. Just off the coast is the sunken Greek city of Pavlopetri that vanished beneath the waves in 1000 B.C. – it’s considered as one possible candidate for the Atlantean myth and a UNESCO World Heritage site. There’s nothing around you but sun, sand, and the area’s tiny port where you’ll find only the most rustic of Greek taverns. Overnight in Elafonisos.

Your next stop is Kythira, the birthplace of Aphrodite and crossroads of Mediterranean civilizations since as far back as 6,000 B.C. Situated between the Ionian and the Cyclades, Kythira is one of the Homeric islands in which Odysseus visited on his quest to return home. Greek, Venetian, Ottoman, French and British cultures, all left their cultural and architectural mark in Kythira. So, though part of the Ionian islands, its fusion character is distinct from the Ionian and Cyclades islands. The island’s fishing village of Kapsali is your first port of call – the walk up to Kythira will find you and the family in the shadow of the 13th century Venetian era castle, with a breathtaking view of the Mediterranean. You can hide away in tiny Avlemonas or cruise to beautiful Kaladi or Diakofti. Near Diakofti, take the family for an organized tour of Chousti Cave, a religiously important cave during the Classical and Roman times, believe to be dedicated to the goddess Venus. Overnight in Kythira.

The following morning you’ll start doubling back toward Sounio, stopping at Ermioni for a refreshing swim and lunch in it’s main port, an attractive spot filled with little shops and traditional tavernas. In the afternoon you’ll head for Sounio, where you will have the chance to witness the most beautiful sunset you can imagine, with the breathtaking and ancient Temple of Poseidon as your background. The temple has been a landmark for mariners for aeons. Overnight in Sounio. 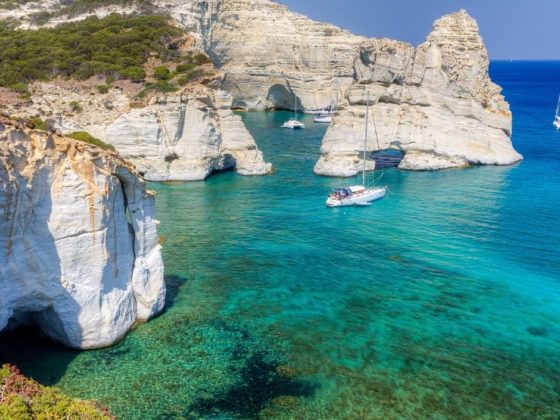 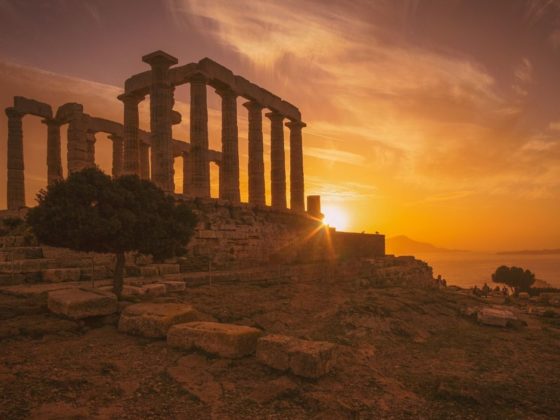